Over the summer months, the Provincial Contract Action team (ProCAT) kept our Put Care First: End Understaffing, and Be Fair to Those Who Care messages alive and kicking.

Working together, the ProCAT is raising awareness with the hope of gaining public support to create a safe care environment. 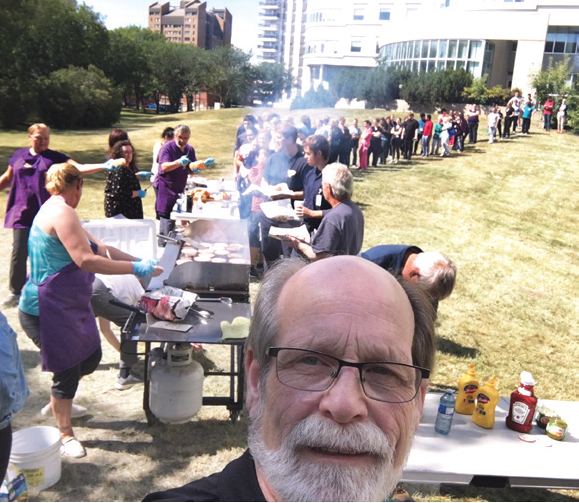 The success of this group has so much to do with their ability to lean on each other and help each other out.

Their energy is contagious. They began a tour of the units within the former Cypress, Heartland, Saskatoon and Five Hills health regions in July and almost completed their circuit by early September.

At all of the unit visits, our members signed postcards and learned how to navigate the on-line campaign at ndUnderstaffing.ca while either hosting a BBQ or bringing in ice cream treats.

But they didn’t stop there. Your ProCAT has been gathering signatures in support of the End Understaffing campaign every opportunity they have.

In Swift Current, you may have noticed that the ProCAT held a food bank drive at Market Square on three Saturdays in August in conjunction with Salvation Army and South West Crisis Centre.

They attended the Friends with Benefits workshop at St. Thomas More College on September 26 to raise awareness and support for our campaign with a table full of materials.

This date celebrates the official opening of the Children’s Hospital, a milestone for Saskatchewan. While we all know that the right number and kind of beds is important to the province, we need the government to appreciate that the right number of staff on the front line is necessary as well.

The ProCAT have booked a table at the upcoming SFL convention to garner added support from the labour movement.

Their work isn’t over until we reach a fair agreement!