All Out To Stop The Cuts!

The SEIU-West Political Action and Awareness Committee supports the Protest at the Premier’s Fundraiser on Thursday, April 27 from 5-7pm at Prairieland Park in Saskatoon. We invite you to join this important action! 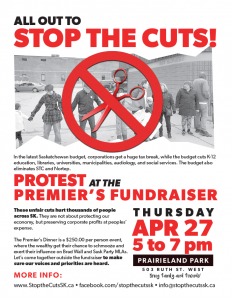 The latest Saskatchewan budget included many cuts that hurt all of our communities:  five different health care programs have been cut including audiology, podiatry, travel immunization clinics, parent mentoring program, and pastoral care – this has resulted in further layoffs in health care. Libraries and park budgets have been slashed, while K-12 education has been ransacked with future layoffs. The entire STC has been eliminated, resulting in 224 good jobs being lost. Pastures are being threatened, seniors are being forced to pay more in long-term care and we all have to pay more in PST, including a new tax on children’s clothing.

Meanwhile, the government chose to give corporations more tax cuts, causing Saskatchewan to have the lowest corporate tax rates in the country.

The Premiers Dinner is $250 per plate which gives the wealthy another opportunity to influence Brad Wall and our Sask Party MLAs, so we need to come together as the majority who say no to this cruel budget! By joining together, we can ensure our voices and priorities are heard.

For more information, visit www.stopthecutssk.ca and RSVP/share the Facebook event by clicking here.

Check out some of our frontline health care heroes for Health Care Providers Week! The below health care providers are just an example of the caring people who enter the health care sector for the benefit of others, and it’s important to take the time to recognize the skills, experience...