An Interview With Lori Johb & the Ladder of Engagement

Lori Johb has had many roles in the labour movement in Saskatchewan since the 1990s. In SEIU she has served as a shop steward, course facilitator, unit chair, and executive board member. She has served on the Executive Council of the Saskatchewan 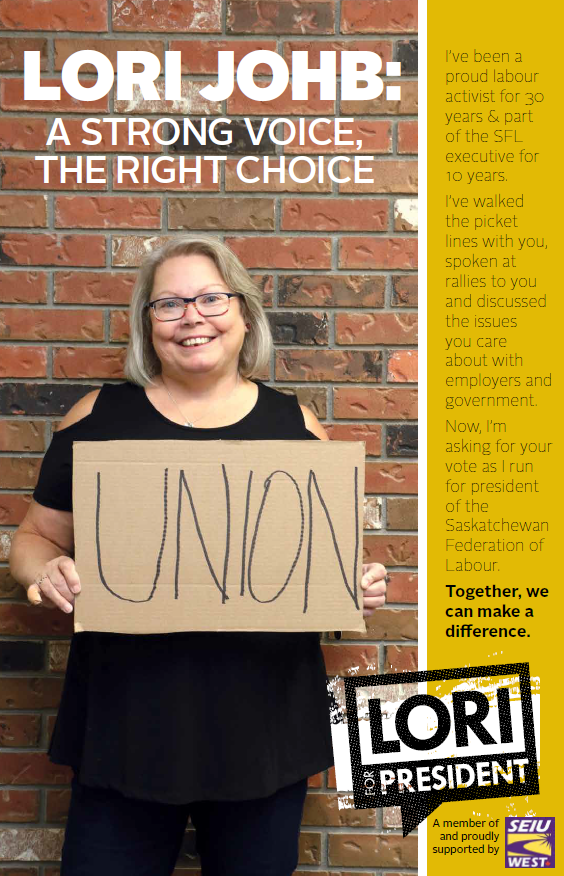 Federation of Labour (SFL), first as a Vice-President and since 2010 as Treasurer. This June, she put herself forward as a candidate for SFL President after Larry Hubich announced his retirement. The vote will be held at the SFL Convention in Regina October 24-27. SEIU-West is delighted to share this interview and is proud to endorse Lori's bid to become our next SFL President!

Q: When did you first become a union member? What was your first introduction to a union role within SEIU?

A: I began working as a dietary aide at Lerose Lodge in LeRoy in 1988. At the time we were represented by SEIU Local 333. I was recruited almost immediately to become trained as a shop steward.

Q: What has motivated you most as you have climbed the steps of the engagement ladder?

A: Health care reform, which forced changes to union affiliation (more than once) has helped me grow as an activist. In 1996 our facility closed and we were merged with another long-term care facility. This experience showed me how working in solidarity with others can turn a devastating situation into something positive. These are just a couple of examples. Seeing the strength in others and in working together has motivated me to become a leader.

Q: Do you have a particular area of interest that led you to get involved with your union and the labour movement?

A: Ever since I first became involved in my union, one of my most important priorities has been worker safety. It started with workload issues and training around Occupational Health and Safety (OH&S) which really convinced me that collectively we can make a difference. I encouraged our leadership at SEIU Local 333 to start a Worker Safety Committee. This committee continues to do great work. I believe ensuring workers are safe and healthy at work is one of the most important things we can do.

Q: If you could offer one piece of advice to those who are just becoming union members or just taking on their first leadership role — what would it be?

A: One of the best things about my role as a leader and as a facilitator is the chance to mentor young workers. The advice I like to give them is: be present. By this I mean, ask questions, show interest and don’t get discouraged. If you find an issue that interests you, speak up and take on a role, even if it scares you a little. We can be most effective when we step outside our comfort zone. Young people need to realize that they have a great advantage because the labour movement needs them more than ever.

How to Vote Municipally: Swift Current

How to Vote Municipally: Regina