I want to continue to share the questions from our recent virtual town hall meetings. And as I do that, I want to point out an interesting piece of information: these questions are focused on the health care sector, but our education sector is being pressured to accept these cuts as well.

Think about this: the provincial government cut tens of millions of dollars from the education sector budget and is looking to find these savings by eliminating the positions of front line Education Assistants, bus drivers, maintenance and custodial staff, cafeteria staff and Administrative assistants. These are the very people who, through their actions, help teach our children strong values, fairness and achievement! Eliminating essential positions in any sector is a short sighted response and will ultimately defeat our ability to attract people to our province.

I was at a recent rally in front of Warren Michelson’s office (Moose Jaw Sask Party) protesting the cuts to the education sector with CUPE members and his response to the message to ‘reverse the cuts in the education sector’ was to claim that, while it was a tough budget, it was done so that future generations weren’t saddled with debt. We already know that argument is so full of holes even the Sask Party no longer runs the Brad Wall “Tim Horton’s lineup” ad. We all realize that the reversal of corporate taxes breaks could have assisted with that; the proper stewardship of our finances and resources could have assisted with that; even some oversight on Bill Boyd’s activities could have assisted with that… but instead, this government has determined to create a head tax on front line education workers (and all public sector workers) to shoulder a debt that we had no part in creating!

I am outraged at the sacrifices we are all being asked to make, while politicians willfully ignore the impact of the decisions they make.

Now, onto the next series of questions from the virtual town hall: (these are continued from the Oct 13 post)

4. How much do the increments affect part-time people? – Helen, Humboldt.

In SAHO’s proposal regarding the two lower pay bands, they indicated that it wouldn’t affect current staff, but would only affect those new staff hired after the Collective Agreement is signed… if it was agreed to.

5. How much does the government want employees to pay into the benefit plan? – Kara, Moose Jaw.

What is being proposed is 25% of benefit contributions would be paid by individual employees. Now the specific amount is different for each person, as our collective agreement sets out that funding for the Extended Health and Dental Plan is set at 3.1% of payroll. But further to this, think about it this way: we negotiated that percentage for EHD in previous years; we gave up other proposals, and monetary increases in past rounds of bargaining in order to get (and keep) this funding amount…so we’ve already paid for this EHD funding… I don’t think we should have to pay for it again via a co-pay of 25% of benefit contributions!

6. If the date goes by and we haven’t settled can the government impose their will with regard to cutbacks, etc? – Terry, Moose Jaw.

The Sask Employment Act (SEA) sets out that an employer can issue a last offer to a union, which would trigger a vote of the membership on that final offer. If it’s not an offer that we think is good, your SEIU-West bargaining committee would likely recommend against it. But you would still have a vote – and be able to decide. While other provincial governments have attempted to legislate collective agreement terms, most of these laws are challenged in the courts as violating the unions right to collective bargaining. To date, no provincial government has successfully legislated roll back terms for a collective agreement.

7. If they’re going to have smaller health division, the southeast corner is going to be shafted because they already are. It doesn’t make any sense. It didn’t work before, why will it now? I don’t feel we should be paying for MR. Wall’s mistake. – Kathy, Langham.

Well, the Saskatchewan Health Authority (SHA) will be a province-wide health region, essentially. (This is the same model that Alberta and Nova Scotia went to). There will be ‘integrated service areas’ that outline general service areas where primary care teams will operate as outlined in the map. 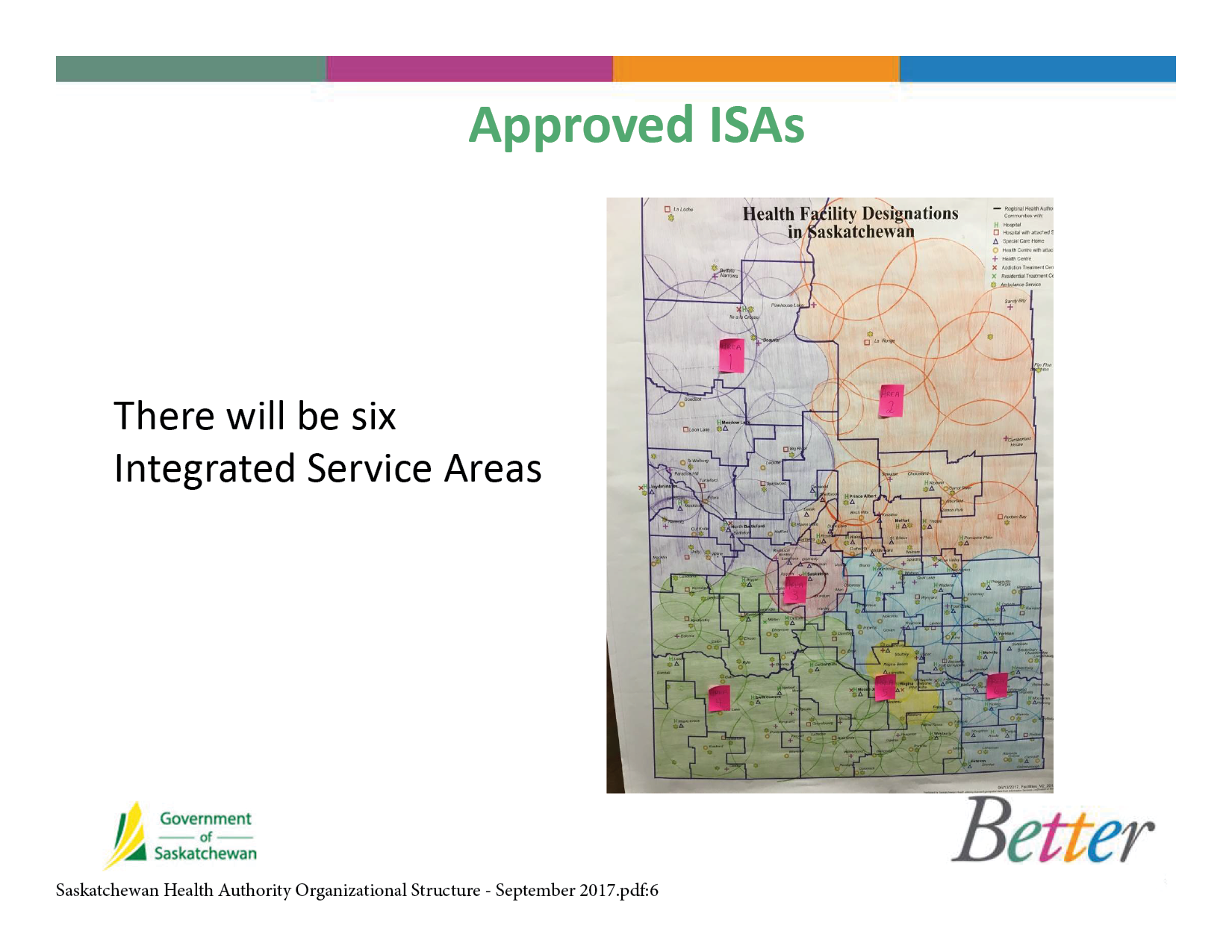 I think we need to be aware that local, rural voices are being severely scaled back on their input into the direction of the SHA. With the integrated service areas, there may be some local working groups…but this has not been finalized. SEIU-West has reached out to towns and rural municipalities across the province to raise our concerns about the provision of funding and local health care services and make sure they are aware of future changes to the health system.

Thanks for your interest in these updates and the huge importance for all of us to support public sector workers – and workers in general – who are paying a huge price for these changes to funding, governance, and service provision. I’m proud of the engagement that our members have shown by reaching out to our elected MLAs…but the message is still the same, we need each of you to take the time to make one phone call, write one email, or better yet, set up a meeting with your MLA to talk about your job and why it’s important to our community and what a negative impact a -3.5% cut would have.

Together, let’s keep our message strong – NO cuts – NO rollbacks – PAY US what we are worth – TREAT US with respect! We need to step up the pressure and hold our politicians accountable for the decisions they make…and they made the decision to put this in front of the bargaining table.

Don’t forget to check in for the October 25 rally at the Legislature to Reverse the Cuts to public services… we need all of you there! There will be a free bus ride in it for you!