Members of the Political Action and Awareness Committee (PAAC) attended a Saskatoon Climate Change Town Hall on May 24th, 2016. The Federal Government has encouraged its MPs to attend their local Town Halls in order to listen to the public concerns and ideas around Canada’s plan to address climate change. It was a hugely successful event in Saskatoon; people were spilling into the hallways in order to have their say! The people of Saskatchewan recognize the need for climate action, and SEIU-West was proud to help sponsor the event. 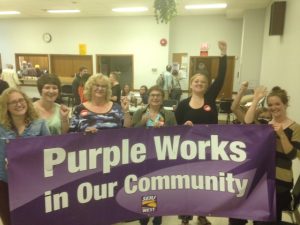 The four topics of discussion included:

Mitigation – How and where to reduce emissions

Carbon Pricing – What is the best way to put a price on carbon emissions?

Adaptation and Resilience – Preparing for the impacts of climate change

In celebration of Environment Week, SEIU-West is proud to share the reports from members of the PAAC – we also invite you to attend an Iron and Earth Presentation in Saskatoon shortly after Environment Week so you can learn more about green jobs!

It was exciting to see so many people taking time out of their day to come and exchange ideas about climate change. Approximately 170 packed into the Town Hall to discuss climate change in round table groups. In Canada, Saskatchewan is the worst province for emissions per capita followed closely by Alberta. This is not something we can be proud of.

We discussed four themes at our round tables. Here are some of the ideas that came from our group:

Jobs and the Economy –

I heard two very important themes being repeated during each round table report. The first was that codes for homes and buildings need to be improved and enforced. The second theme was Education, Education, Education! It was stated many times how important it is to educate the public. This would be the key to making any inroad on climate change.

On May 25, people in Saskatoon gathered to talk about climate change. Similar meetings were held across the country to come up with ideas to present to our government about how we can enact real change to save our planet. The focus was on reducing emissions, carbon prices, jobs and growth, and adaptation to climate change.

Mark Bigland-Prichard spoke about the impact as temperatures go up, such as droughts, death of coral reefs, forest fires, and heat waves. We are already 2.5 degrees higher than the pre-industrial average. The target from Paris Summit was 2 degree commitment with an ambition at 1.5 degrees.

The question is how do we stay under 1.5 or 2 degrees? What is our carbon budget? The best estimate gives us a 2/3 chance of staying under 2 degrees, which is 880 tons of carbon emission. The claim on reserves is 3000 tons. We can afford less than 0.3 million barrels of oil a day but currently, we use 2.4.

Cat Gendron spoke about how we must confront the false idea that we have to choose between jobs and the environment. We need to shift the conversation from “but we need those jobs” to “we need to transition to green jobs”. In fact, pipeline jobs are more likely to be temporary and there are more jobs created with green energy. We have seen over 50,000 layoffs in Alberta and roughly 7000 in Saskatchewan – this boom and bust effect on workers is not good for anyone. Why not ensure affected workers attain work within the renewable sector? Their existing skills are often applicable.

Coleen from Fond-du-Lac spoke of her people on the reserve and the effects uranium had. The tailing ponds go to Lake Athabasca and straight to her community. Government puts communities in a vulnerable state by offering short term money and long term problems.

We broke out into groups that then reported back, and we will then take these reports to Ottawa. Attending was NDP MP Sheri Benson who heard loud and clear from approximately 170 people that we need legislative change to save our planet.

In the first hour of the Town Hall Meeting, attendees were invited to a primer where small groups were asked to discuss the 4 key issues. Within an hour, there were tons of people coming in and by 7:30pm, it was standing room only.

The event started with a welcome from the organizers, followed by an Indigenous prayer. Sheri Benson, MP for Saskatoon West, thanked everyone for coming and was glad to be there to listen. Colleen from Fond-du-Lac was next to speak, and she discussed the impact of Uranium City affecting her community. She also stated that Indigenous people must be included, moving forward because they bring knowledge to the table.

The next presentation was about Tackling Climate Change where we discussed how Canada was one of 195 signatories at the COP 21 Paris Summit where we agreed to limit the average temperature rise to less than 2.0 degrees Celsius and strive to keep the increase below 1.5 degrees Celsius. It is important to reach this goal as many people are already experiencing the effects of climate change such us : more extreme weather events, longer, hotter heat waves, thawing permafrost and loss of Arctic ice, and threats to local food sources for Indigenous people in the north.

Other facts presented was Saskatchewan’s provincial emissions per capita: between 2009-2013, Saskatchewan was the highest emitter, followed by Alberta. The areas in which climate change is especially impacted are through oil and gas, which leads at 26%, followed by transportation at 23%.

During the next hour, the objective of the meeting was to have our say and to share ideas on how to address climate change. We were divided into groups to talk about the 4 key issues and come up with ideas about how we can address them. Most of the groups had similar ideas, here are some examples:

On jobs and growth – educate people in order to confront inaccuracies within green energy; invest in a just transition; ensure affected workers have retraining and relocation; fund a strong social safety net.

On adaptation and resilience – build solidarity; choose to do what is right (climate justice); consult with Indigenous people; include municipalities in global planning.

Every group had a note taker and presenter -it was such a large crowd there was not enough time to really expand the ideas. However, organizers are collecting all the information and sending out our group ideas to the federal government.

It was a good meeting with great turnout, and SEIU West made a presence with its big purple banner on the wall!

During Health Care Provider’s Week, we invite you to reflect upon the team of compassionate people who provide you with quality health care services throughout the Saskatchewan. Each and every day we are astounded by the hard work and value that these members contribute to our society, particularly while on...